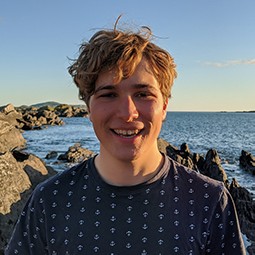 Fionn is a 20 year-old student, scientist, anti-plastic pollution innovator focusing on solving the plastic pollution crisis. He grew up in a remote region of Ireland and spent a large portion of his childhood paddling around the coasts of Ireland in his kayak with his dog India.

Fionn was concerned as he observed the increasing amount of plastic washing up on the coastline so he organized several beach cleaning operations, as well as building machines to quantify and collect plastic pollution.

When he heard about microplastics, the harmful tiny plastic particles that cause damage to ecosystems, he became even more upset! Did you know that we consume a credit card worth of plastic every week through contaminated food and water, (WWF study 2019) and their consumption has been linked to Alzheimer’s and cancer?

Fionn built several machines using LEGOs, bits of wood and some microcontrollers and sensors to test for these microplastics. Horrified at what he found and unable to find any methods for their removal, he decided to roll up his sleeves and build a method to remove microplastics from water himself. Following many failed attempts (some of which resulted in his home almost burning down and a power cut in his local village) he made a device which uses a magnet-based method to remove the particles from water with surprisingly high extraction rates as well as being fast, non-harmful and clean.

He left top scientists in awe at several science fairs as well as being named the Grand Prize Global Winner of the Google Science Fair 2019. Mariette DiChristina, editor in chief, Scientific American said “Fionn showed tenacity and dedication to solving an important environmental problem. He embodies the spirit of exploration.”

Fionn founded Fionn & Co. LLC where he is using his method to test and work on a device for the efficient removal of microplastics from water. He is currently working with Stress Engineering to fine-tune, build and test his designs.

While Fionn is studying in the field of Chemistry, he also is a sought after global keynote speaker. He has spoken at the World Economic Forum 2020 (and has been invited back for 2021), European Commission research conference, Global Plastic Health Summit, Smithsonian’s Earth Optimism Summit 2020, The Martin Luther King Lectures, and served as a judge at GreenTech Festival Berlin 2020 as well as The Young Plastic Pollution Challenge. His story is featured in Forbes, Business insider, Bloomberg, and CNN to name a few. He was awarded a 2019 Straubel Leadership Award.

Fionn is currently featured in a Global HP Commercial, and he is working on his first book.