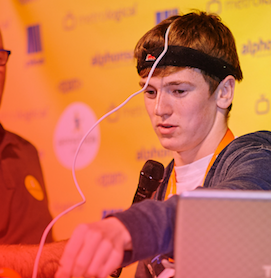 20-year-old Conor Begley, from County Louth in Ireland, is the creator of Quick Com, a cost-effective communication aid that allows severely disabled people to communicate and interact by performing small movements such as twitching a muscle or bending a joint. The inspiration for the project came from his aunt Fiona, a severe cerebral palsy patient, who is confined in a wheelchair with no ability to speak. Determined to improve her communication, which involved using a tedious and rudimentary spelling system, Conor built Quick Com.

With Quick Com, Fiona is able to communicate simply by raising her eyebrows. He began three years ago and has since developed his system to encompass features like e-book reading, television control, and interactions with room environments. Quick Com costs ~$100 to make and in the future, Conor hopes to set up "The Fiona Foundation,” a non-profit organization that will allow him to provide the Quick Com system for a low cost or for free.

Through his work with Quick Com, Conor Begley has won the Technology Student award at BT Young Scientist, as well as the Rotary Great Britain and Ireland Young Citizen Award. He has attended events like the Liberty Global Tech Summit in Amsterdam and is currently a Global Teen Leader for Three Dot Dash. Conor has recently spoken at the TedxTeen event in London about his work and how we view communication.

At the moment, he is studying a joint masters in Electronic and Software Engineering at the University of Glasgow and is focused on getting a patent for his work.

Conor and Jon Namnath co-founded Tribe Dynamics in April 2012, after Conor discovered the power and potential of influencer marketing while working in Australia. With extensive experience in search marketing, reputation management and CRM systems, Conor and Jon decided that influencer marketers needed their own analytical systems and enterprise-class technology. What began as an intuitive theory shared by two long-time friends, the Silicon Valley based startup has become a leading authority in technical marketing and social analytics within the beauty, fashion, and lifestyle industries.

Under Conor’s direction, Tribe has developed close relationships with some of the beauty industry’s top brands, organizations and publications, including WWD/Beauty Inc., CEW, and NPD, who feature the company’s analytics and expertise on an ongoing basis.