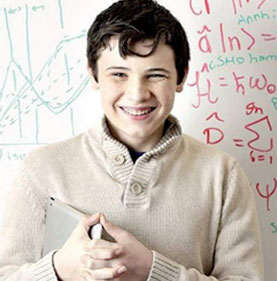 GOALS & ACHIEVEMENTS
He is an 23-year-old theoretical physicist at Perimeter Institute.

Jacob Barnett is an 23-year-old theoretical physicist at Perimeter Institute. His research areas are loop quantum gravity and quantum foundations. He boasts an IQ of 170, that is believed to be higher than Albert Einstein.

Jacob was diagnosed with Autism when he was two years old and was homeschooled by his parents. He showed interest in physics from a young age, and proved his doctors wrong.

Jacob started taking college classes at Purdue University Indianapolis (IUPUI) at age 8. At age nine, while playing with shapes, he built a series of mathematical models that expanded Einstein's field of relativity, which was described by a Princeton University professor as ground-breaking.

Age 10 he self taught and finished all high school math in 2 weeks. He went on to publish his first piece of research in physical review A at age 12. Jacob began to work on his Master's at 13, and was accepted to the Perimeter Institute at 15.

Jacob's work aims to lead us into the quantum age of science!

Coming up Jake will be doing research in Fermion Doubling in Loop Quantum Gravity, working on a description of quantum tunneling through complex classical trajectories, and even dabbling in a bit of experimental verification of some of his prior work.