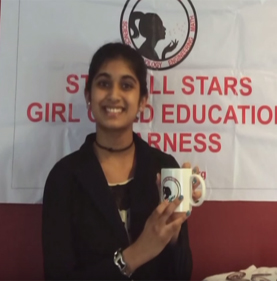 Sajni is a 20 year old, attending Thomas Jefferson High School for Science and Technology, who believes in creating a difference in our gender biased world. Today, there are many stereotypes present in our communities about girls intellectual abilities in STEM. Her goal is to eliminate these stereotypes and open more pathways for women without the proper opportunities for an education. Sajni’s passion started from her childhood when she noticed gender bias in television shows and toy stores. She then created her own organization called STEM All Stars. STEM All Stars is an international nonprofit organization committed to breaking the barrier of gender stereotypes, inspiring girls to enter STEM majors and fields, using STEM education and technology to improve the lives of women and girls around the world, and empowering girls to be our future global leaders.

Through STEM All Stars, she has done extensive work around the world and launched 23 clubs. The Indian Government has donated $22,000 for her organization, which she contributed to underprivileged schools in India. Recently, STEM All Stars has also adopted a few girls and is sponsoring for their education.

She is also the author of the children’s book, Roo and His New STEM Habitat, which takes place in a classroom environment and tells an engaging story about how a group of students build a habitat for their new classroom pet bunny using Science, Technology, Engineering, and Mathematics. In addition to this,she was one in 75 selected at the International Math League Tournament at Stanford University, and she also serves as a young ambassador for Eduzine Global and Student Global Ambassadors Project. Furthermore, Sajni has engaged in speaking conferences such as the O’Reilly Velocity Conference, IEEE Women in Engineering Leadership Conference and the Princeton University THINK Design event. She won the $700 JOSTI Overseas Grant, which she used to create an app where women and girls can connect with female mentors. In addition to this, she also invented an app to aid people with hyperopia. Sajni was an invitee to TEDxYouth and has conversed with many local politicians such as Barbara Comstock, Puneet Ahluwalia, and Gerry Connolly about global issues, such as human trafficking.