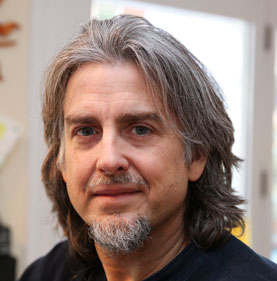 John Quackenbush received his PhD in theoretical physics from UCLA in 1990. Following a physics postdoc, he received a Special Emphasis Research Career Award from the National Center for Human Genome Research to work on the Human Genome Project, spending two years at the Salk Institute and two years at Stanford University working in genomics and computational biology. In 1997 he moved to The Institute for Genomic Research (TIGR), pioneering expression analysis. He joined the Dana-Farber Cancer Institute and the Harvard School of Public Health in 2005, and works on the reconstruction of gene networks that drive the development of diseases. He also founded and directs that Center for Cancer Computational Biology at Dana-Farber, which provides broad support for genomic data analysis.

He currently serves on the boards of five major journals, and is editor-in-chief at Genomics. He has also served on several committees at the US National Academies and the Institute of Medicine, and is a member of scientific advisory boards of a number of biotech start-up companies. With his colleague Mick Correll, he co-founded GenoSpace, a company that has developed advanced cloud-based software tools to support genomic research and precision medicine. In 2013 he was honored as a White House Open Science Champion of Change for his work in making large-scale data available, usable, and useful.